Do you feel your head as a sandwich -- as layers of bone, skin and hair? Probably not. The brain integrates ourselves into a functioning, unconscious whole. We feel the cladding only when something goes wrong, something as simple and universal as an infestation of lice. Then the contours of the head become very apparent and our goal -- eradication and oblivion -- becomes imperative. 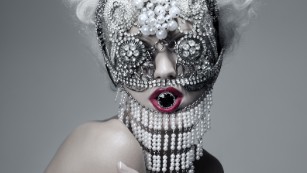 Otherworldly designs shaping fashion's future
The human head -- the representation of thought, the sensory apparatus, the unfolding of consciousness, the key to our future as trans humans or post humans -- is at the forefront of science, technology and even art. It always has been so, though to varying degrees.
Read: Why Matty Bovan is selling you neon, rhinestones and glitter
But it is interesting to note that representations of the human head in prehistory, as depicted in the Venus of Willendorf were devoid of facial features for 20,000 years, until the Egyptians began depicting the human head in profile. The face was not important for that representation. The "culturally desirable attributes of the female form" were.
Read: What makes a hair icon? Hillary Clinton's stylist speaks out
We clad ourselves to disappear, to blend, to transform, to hide, to level, to exaggerate, to hybridize, to desexualize, to attract, to role play, to contextualize, to shelter, to ritualize, to multiply, to joke and to perpetuate ourselves.

The inescapable and timeless 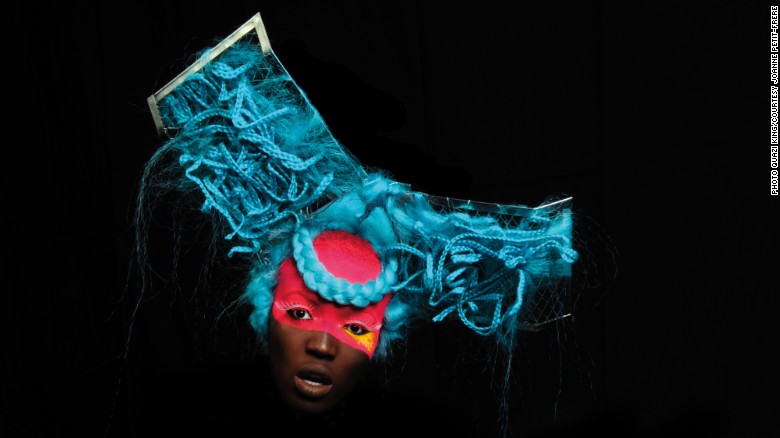 A still from Joanne Petit-Frere's "Redressing the Crown" series
At any given age, we learn the cultural significance of our hair. We may find ourselves at an age where tamed buns and tight forms are the style zeitgeist. Or we may recognize that long Rapunzel-style tresses and locks hanging in our faces—revealing only traces of nose and eyes—are the way to be understood and desired.
Read: Stephen Jones on how a hat can change your life
Periodically we disappear into hoods, cowls, balaclavas and sunglasses. We tweak the nose, pull the skin, resurface, and apply makeup to give the appearance of extension.
Pinocchio-style, we sometimes add the stuff of fairy tales: piercings, horns, antennae (the accoutrements of cyborgs), sensors, cameras and technology like Steve Mann's EyeTap. We also mimic. We become Marie Antoinette, or Nefertiti, the Terminator or Po from the Teletubbies. 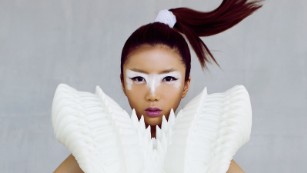 Five names changing the Chinese design scene
But headwear not entirely at odds with the head. They need the head as a substrate; they need it in order to exist.
Read: The new material that could define our age
They are not predictive of a headless future, or a strictly technological one. Most of the head claddings here hark back to skin, hair and ceremonial or ornamental coverings. They are settled in their exteriority and impermanence. They are temporary rooms that we inhabit and shed. They are inescapable and timeless.
While we remain headed creatures there will be extensions of the human head that mimic or transform our perimeter.
"See Yourself X: Human Futures Expanded" by Madeline Schwartzman, published by Black Dog Publishing, is out now.
Category Culture